Scroll down for a lead sheet for The Star Spangled Banner that includes the melody and chords, with versions of the song in seven different keys. There are also links to the song for piano, recorder, woodwind, brass, and string instruments.

The history of The Star Spangled Banner

The history of Francis Scott Key’s Star Spangled Banner is well known, and it tells the story of a very important military victory for the United States. Key, who was a lawyer from Georgetown in Washington, DC, was on a ship near the Baltimore Harbor in the final days of the War of 1812. Just a few weeks earlier, the British had burned much of Washington, including the White House, and they were now bombing Fort McHenry in Baltimore. On the morning of September 14, 1814, after a long battle in which the British were heavily favored to win, Key awoke to see that “our flag was still there.” He set to work on the poem which would eventually become the national anthem of the USA.

Key set the poem to a melody called Anacreon in Heaven, which was written by John Stafford Smith. Ironically, Smith was British, and he wrote the song for an English gentlemen’s society that promoted music. Nevertheless, the melody was also popular in America, and Key’s poem fit the rhythm of the song. To learn more about the history of the song and see some fascinating images of original versions of the poem and sheet music, visit the Library of Congress Star Spangled Banner webpage. The Smithsonian website also has interesting information on the original song, Anacreon in Heaven. In 1931, president Herbert Hoover signed a law that declared the Star Spangled Banner to be the national anthem of the Unite States.

Note that there are many different rhythmic interpretations of the song today. Sometimes the pickup notes at the beginning of the song and elsewhere in the piece are played as a dotted eighth - sixteenth note rhythm. In the early publications of the song, we can see several different rhythms used. In the version on the LOC website, the song is written in a 6/4 time signature. I have left all pickup notes as eighth notes, since it is easier to edit those in case musicians would like to change the rhythms. 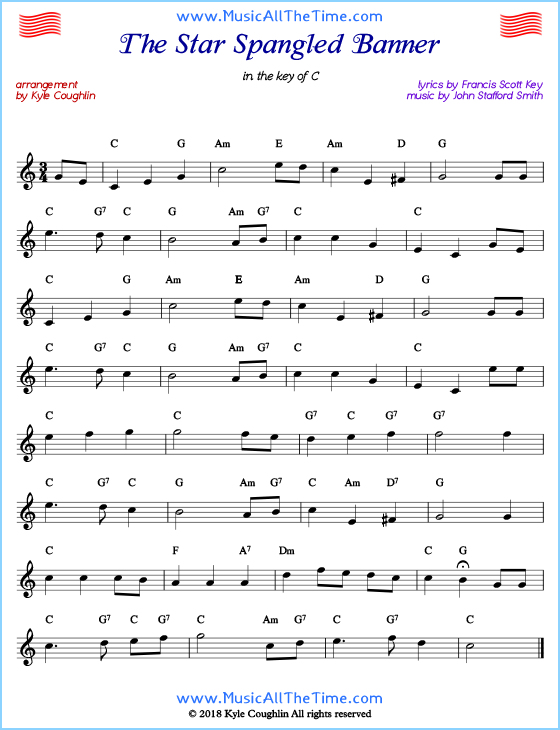